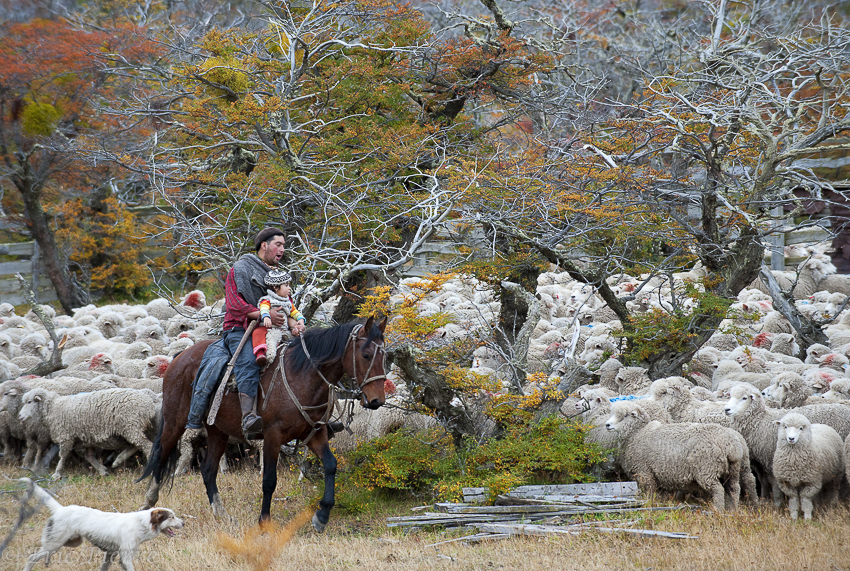 Autumn is one of the best seasons for photography. In September, from Alaska to Kamchatka, Nature colours are sumptuous.
But unfortunately, it lasts for only few weeks per year.
So, what’s to be done ?
When you live in the Northern hemisphere, the only solution is to wait for April and leave for the Southern hemisphere, fall season in Chile for instance !
This is what motivated my first trip to Patagonia : the colours there in April, were exactly as I was looking for …
Then, following the same logic and looking for snow in August, I went back in Patagonia in the middle of the austral winter.

But, with global warming having unexpected effects wherever you are on Earth, there was no snow that year in Southern Chile, except for on one or two days.
Instead of cold and stable weather, I had lots of storms, the like of which we never encounter in Europe. These storms are unusual during austral winter even if they are typical in this region during the rest of the year. Just as you will never forget the biting cold of the Arctic, you will remember forever the violent winds of Patagonia.

Chilean Patagonia stretches as far as the Magellan Strait. Further south, there is only Tierra del Fuego down to Cape Horn. To discover this remote place, one possibility is to fly from Santiago down to Punta Arenas, the capital of Patagonia, located on the shore of Magellan Strait. From this extreme southern point, using a pick up truck (highly recommended …), you travel north up to the mountainous region of Torres del Paine. 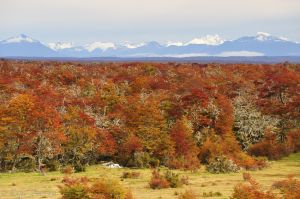 On this road, you cross 400km of flat landscape with very dry grass and only few trees here and there or the occasional bush: it is the so called Pampa. But unlike the most remote places of Canada or Siberia, every 50km or so, you can see large farms called “Estancias” owned by sheep farmers, horses and cattle breeders. Because of these, all along the route, you see hundred of kilometres of wire. So, despite an endless landscape, you do not experience the same feeling of loneliness and wilderness as you feel in Alaska, Siberia or Northern Canada. 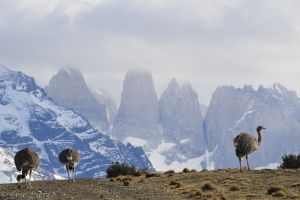 Even before arriving in the mountainous region of Torres del Paine, you may have already observed along the road some groups of guanacos, a kind of wild lama or caracaras, a kind of raptor, smaller than an eagle. Guanacos wander in the pampa, jumping over Estancias fences. They look for grass and are in direct competition with sheep. Caracaras eat dead hares, squashed on the road by pick up trucks. They also eat lambs, attacking them just after birth, or guanaco carcasses left by the region’s top predator: the puma or mountain lion. You might also encounter Darwin’s, rhea a kind of ostrich, most commonly seen in the plains, and grey or red foxes, which usually follow pumas to finish their prey… Last but not least, when you get close to the mountainous regions you might see, condors scrutinizing the land, looking for carcasses. 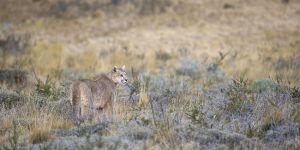 Generally speaking it is always difficult to get close to these animals and the key is to look for carcasses… Puma hunting is generally at night or at the very end of the night, one or two hours before sunrise. As it is a cat, it sees pretty well in the dark. Sometimes with luck or lot of willpower, you may be in just the right place at just the right time, when a puma attacks a guanaco. The action is quite devastating and even in the best case you might only see the puma leaving the crime scene, whatever the outcome of its attack, as generally the puma does not eat his prey immediately. Once the guanaco is killed, the puma might try to hide the carcass with some grass and bushes and leave it until the next night, or later in the day if it’s really hungry, when it returns to the meal. In this case the puma doesn’t stray far from the carcass and so if you are in luck, there is an opportunity to observe, in the daylight, a puma either eating its prey or taking an after-lunch nap close to it. But more often than not, you have to patrol the mountain trails every night, just before dawn, trying to see something in the pick-up headlight beams and carefully listening to the guanaco’ alarm calls, easily recognised when they detect a potential danger, like a puma. 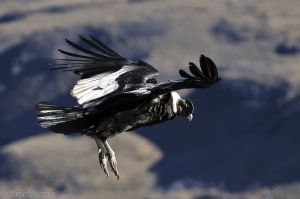 So, to see the pumas, you need to find some live guanacos to observe a potential attack, or a dead one, to wait for the puma to return to the carcass. This quest can take up many hours in a day: you need to walk on mountain trails, scrutinizing the hills with binoculars. It is possible to take advantage of condor behaviour in your hunt, as they patrol in the sky, also looking for carcasses. When a group of condors fly in circle, there is a good chance that a guanaco carcass lies beneath… This is also a great opportunity to observe the condors themselves, but they will not let you get closer than 25m at best. This can also be an opportunity to encounter foxes, as they also generally follow puma tracks or observe condors flying in the sky. 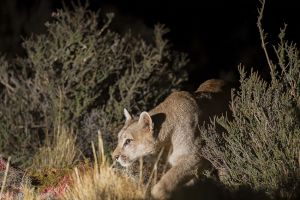 Even if puma viewing is possible at night, shooting remains practically difficult. It is necessary to use powerful lights, so you can see up to at least 40m, not only to find the puma, searching for the reflections of their eyes in the lights (much larger than foxes eyes reflections), but also as light assistance for lens focus. This light can be powered by the cigar lighter of the pick up truck while driving on the trail, but must also work on portable batteries carried on your belt, as you might need to move far away from the truck. It is also necessary to use walkie talkies to communicate with your expedition companions, increasing your chance of cover greater distances. Night vision binoculars are also very helpful and if you choose to remain at night around the carcass, you will have to set up remote controlled flashes close to it, ready to fire when the puma comes back.

But watch out – in Patagonia, you must take great care over the weather, as it changes very fast. Heavy rains and strong winds can arrive all of a sudden and leave you with just a few seconds to find shelter, as it can become impossible to remain on your legs.
Patagonia is not an easy place for nature viewers and the puma is a very elusive and mysterious animal, but having the opportunity to meet the huge eyes of this cat is a very rare experience which absolutely justifies the adventure and shows that man has not yet mastered this wild place, even by bringing his flocks of sheep and wires…