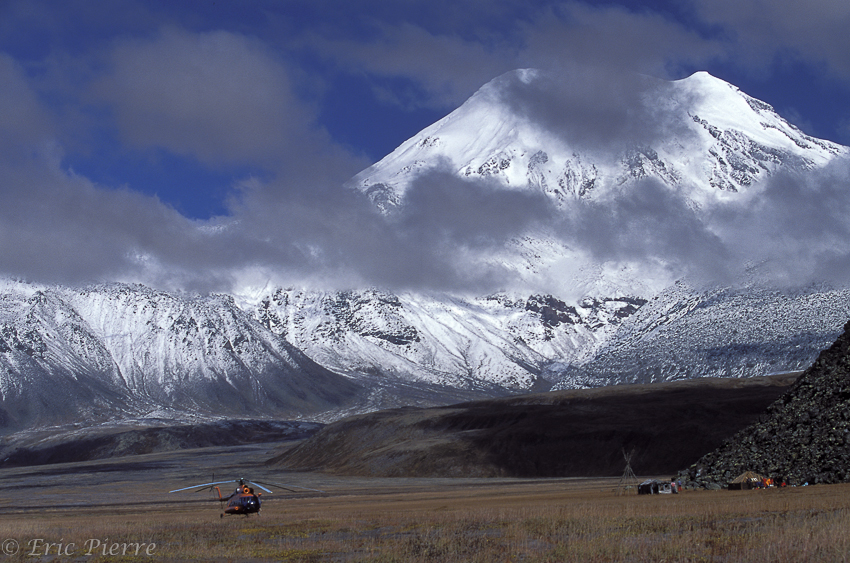 For many, the idea of Siberia summons up an image of a frozen and inhospitable vastness. This image is almost accurate for around eight months out of twelve… But in September there is a short period before the first snow arrives, during which this region is decorated in a cavalcade of a thousand colours.
When you travel in the tundra at this time, whether in Alaska or the other side of the Bering Strait in Kamchatka, you will see the moment when this precarious plant kingdom reminds us of its existence, each autumn, with an unforgettable multicoloured spectacle.
But in Kamchatka, permanent volcanic activity in the peninsula adds a second fantasy of colours to the plant-mosaic, offered up this time by the mineral world. 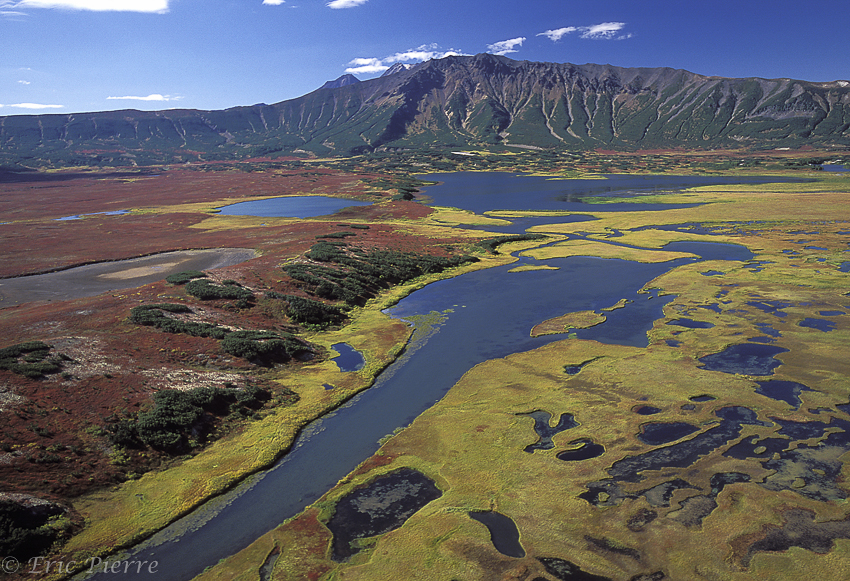 The Kamchatka peninsula is located at the extreme east of Siberia, over 8000km from Moscow. It stretches into the Northern Pacific Ocean from Tchoukota over around 1500km from north to south and 450km west to east between the sea of Okhotsk and the Bering Sea.
There are 439000 inhabitants, of which 359000 live in the capital, Petropavlovsk, in the south of the peninsula.
Its climate is under marine influence along the coasts, and temperate continental in the centre. Winters are coldest in the centre, with temperatures between –22°C and –57°C in January. In July, the mercury can rise as high as 37°C. At the coasts, average February temperatures range from -15°C to -11°C, and in August from +12°C to +16°C. 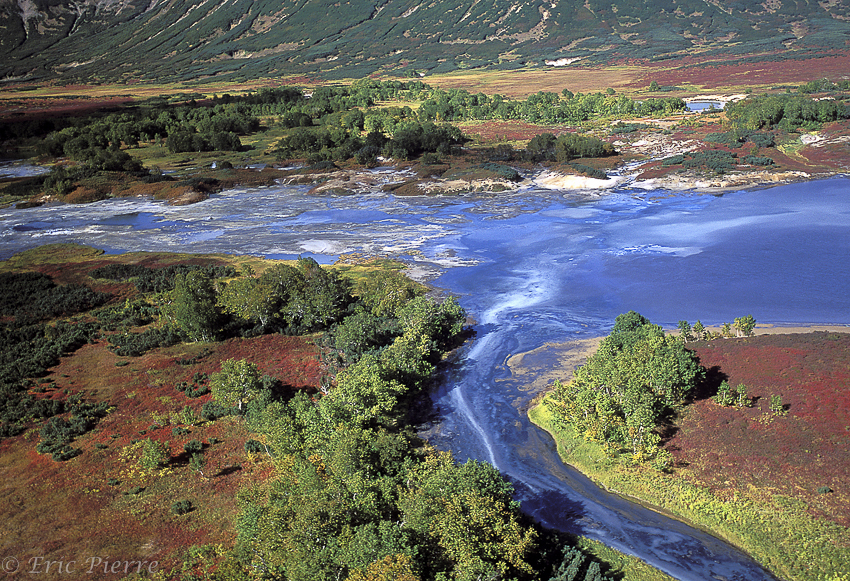 Kamchatka’s individuality comes from its extreme volcanic activity. The peninsula is situated in the “Pacific ring of fire” and is home to at least 29 active volcanoes, and around 160 extinct ones. Most of their craters are to be found along the eastern coast. A host of other geothermal phenomena can be found here too, including geysers, hot springs and boiling ‘mudpots’. One unique location collects all these elements together in just a few square kilometres: the Uzon Caldera. This vast volcanic depression 180km north of Petropavlovsk is accessible only by helicopter in autumn. The instability of the earth’s crust at this point has caused numerous tectonic faults, from which fumaroles of toxic gasses such as hydrogen sulphide, carbon dioxide and methane escape, and from which boiling hot mud balls are projected into the air.

These fractures have also given rise to hot springs in which life in the form of bacteria has developed at temperatures up to 96°C. These extremely thermophilic micro-organisms are the real witnesses to the origins of life on Earth. Many of these bacteria are capable of reducing sulphur, producing methane or even sulphuric acid, thus transforming certain creeks into veritable rivers of sulphuric acid at pH=2. 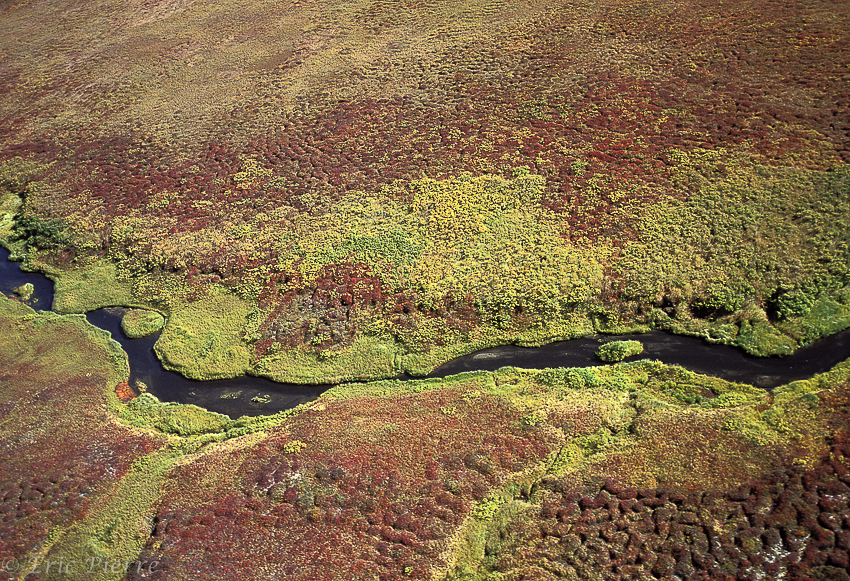 In their cooler areas (below 55°C), the lakes and rivers provide a breeding ground for many varieties of cyanobacteria (blue-green algae).
When looking at this Hell’s Kitchen from the helicopter, you are struck by the multitude of colours nature can offer up in one location. From the intense blue of the lakes and rivers mingling at the surface with the white of suspended sulphur and the long threads of bacterial colonies, to the greens of the thremophilic bacteria. The ochre, yellow and white of the sulphur deposits complete the natural mosaic. It is in September, however, the time when these images were captured, that the spectacle achieves its climax. The vegetation is abundant thanks to the average annual precipitation and the fertile soil, and it is now that it takes on its autumn colours.

The first observers to describe this spectacle (apart from the native Koiak, Itelen and Evene populations who were afraid of it) were the members of the second Bering expedition in 1741.
The current appearance of the caldera with its lakes and ponds is around 40,000 years old.
It is the culmination of hundreds of millions years of volcanic activity, beginning in the Pleistocene era 750,000 years ago. Basalt lava flows formed a volcanic cone, which was destroyed 175,000 years ago during an explosive phase, eventually giving rise to an enormous crater in the east (a remaining sign of which is Barany Peak, the highest point at 1617m, which borders the caldera) and a vast depression in the west, the current Uzon caldera. 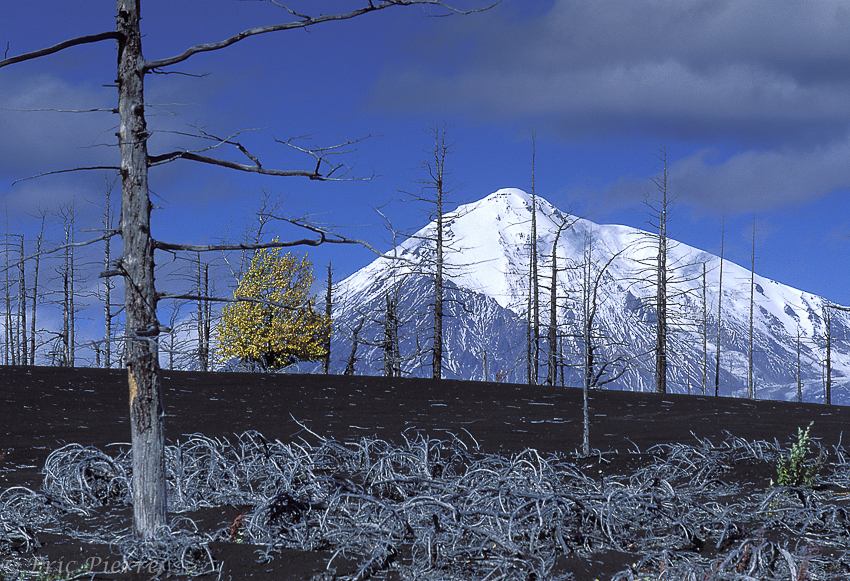 Further north, 350km from Petropavlovsk as the crow flies, but a journey of 12 to 15 hours in a 6×6 truck, we find the Tolbachik volcano (3085m). It most recent big eruption was in 1941, before that of 2013 which re-designed the landscape. 15km from the volcano is a chain of little cones stretching for about 3km – the result of a series of small eruptions between 1975 and 1976. A stroll in this devastated area can only leave you with the impression that you’ve found yourself on the moon. The Russians thought so too: it was here that they tested ‘Lunarod’, their lunar vehicle in the 1960s. Everything is black, there is no plant life, only ashes, solidified lava flows and some ‘volcanic bombs’. 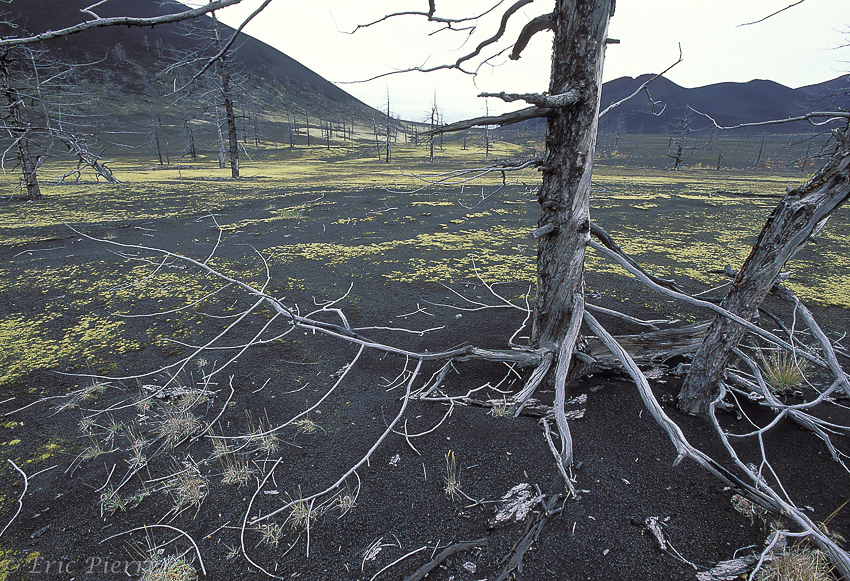 It is a truly apocalyptic landscape. Russian scientists still come here, but now it’s to study the thermic effects of nuclear explosions, and observe how nature re-establishes itself after such a disaster. It is truly an impressive sight. The tortured forms of charred trees and their roots tell the story of furnace which reigned here just 25 years ago. Today, in certain places, Mother Nature is reclaiming the land through mosses, bushes and dwarf trees. The multicoloured spectacle she offers in the month of September defies the drab uniformity of this world of ashes. 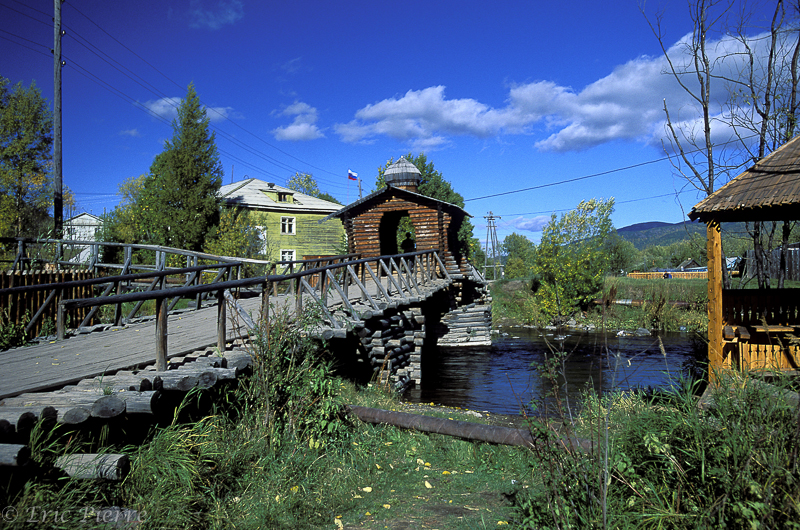 In the east of the region, only 100km as the crow flies, but still nearly 6 hours journey in the 6×6, we find the villages of Anavgai and Esso. These villages are populated mainly by settled Evene nomads. In the centre of Esso traditional houses have been reconstructed with larch wood from the big forests which surround the village and give the valley its constant greenness. The name of the village, ‘Esso’ means ‘larch’ in the Evene language.
The region is the ideal starting point for the journey north-west in search of the huge reindeer herds. Since the reindeer herders and their animals are constantly on the move in search of fresh grazing, it is impossible to know in advance where they will be, and the only effective way of finding them is with a helicopter.
Once the ‘yarangues’ of the reindeer herders’ camp have been found, the herd is never far away. In September, the time of the rut, adult males are very excitable and aggressive, and fights frequently break out. This is the time when their antlers reach maximum width, and the velvet is rubbed off to reveal their vivid horn colour . 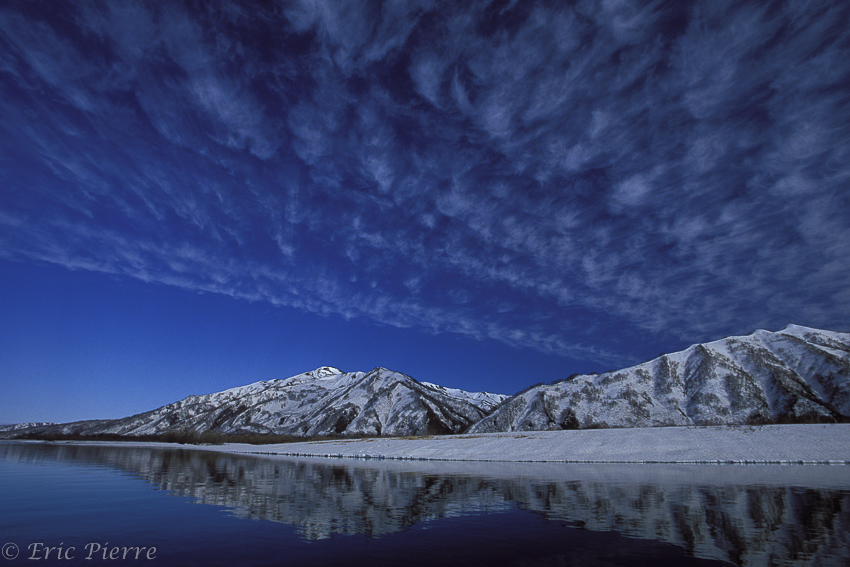 Much further north, beyond the Klyuchevskoy and Chiveluch volcanoes, almost at the mouth of the Kachatka river we find a very large lake. Unlike the better known lakes of Kamchatka, lakes Kuryl and Kronotsky, is rarely visited: this is Lake Azabachje. In autumn, during the great salmon migration, large numbers of bears wander these shores in search of their favourite food, providing precious proteins for the long winter hibernation.
Travelling in the remotest regions of Kamchatka often requires some serious logistics. Whether it’s an MI-8 helicopter or an Oural 6×6 truck, there’s an adventure around every corner and it will take you to breathtaking, rarely visited places.