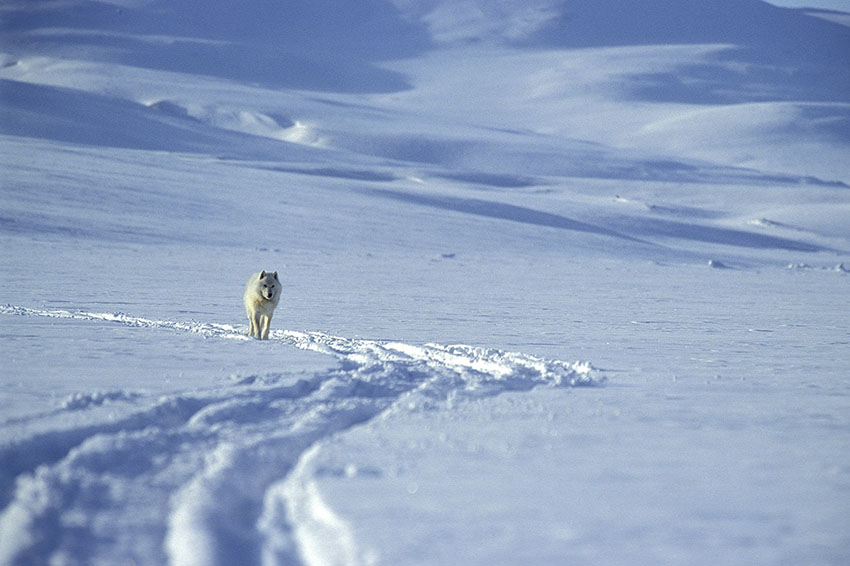 Travelling for the first time to Ellesmere Island (Canadian High Arctic), I had the opportunity to meet an Inuit hunter from the small community of Grise Fiord, who agreed to be my Guide and to help me to discover this part of the Nunavit, his land.
Ellesmere Island is located in the extreme north of the Canadian Arctic Archipelago. ¬Its northern coast is less than 800km from the geographic North Pole and its southern coast shelters the only permanent community living on the island, (apart from the Eureka weather station and Alert army base) the hamlet of Grise Fiord (148 inhabitants, 95% Inuits). Between these two points, there is absolutely nothing! That is to say there is absolutely everything for those with a passion for wild spaces and polar adventures: almost 1000km of frozen loneliness!

Ellesmere Island is a succession of gigantic fiords, high mountains, deep valleys, glaciers and immense plateaux. In April a solid ice pack 1 to 3m thick, is still present in the fiords, and a 20 to 50cm layer of snow still covers the plateaux and the bottom of the valleys (actually, snow fall is relatively low in the arctic). With the return of permanent daylight, it is the perfect month to reach any part of Ellesmere with snowmobiles (or skis): the frozen fiords, the icy valleys and the snowy plateaux are a truly endless network of penetration trails. 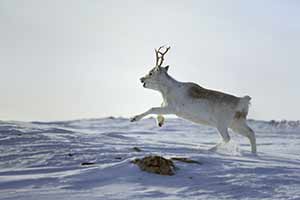 The Inuit People do not miss out on the perfect opportunity for hunting that April provides. And so it proves difficult to find an experienced guide at that time. As there is no “tourism” in Grise Fiord, the potential guides are hunters in the community. 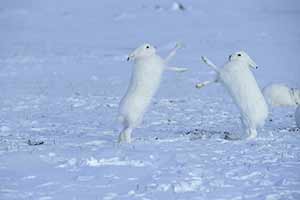 Ellesmere is not only a mineral world of rocks and ice. It is also the home to diverse fauna. All the arctic species are found here: polar bears and seals of course, but also muskoxen, arctic foxes, arctic hares, the very rare Peary Caribous… and the region’s predator: the arctic wolf. 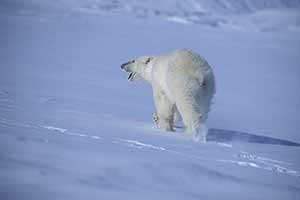 For people who are passionate about photography – especially wildlife photography, there is a double challenge here: first, to organise an expedition, and then to come back with relevant photos. Following my first survey trip to Ellesmere, I set up a second trip two years later, this time dedicated to the arctic wolf. Because, the traditional Inuit way of life is slowly disappearing, people able to travel alone far from the hamlet are becoming a rarity. Only the elders, like Charlie, are ready for this kind of adventure and fortunately for me he had been thinking for a long while about taking someone like me with him on a journey to help them to discover the arctic. I was somehow his guinea pig! 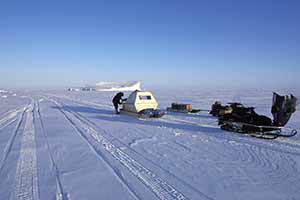 When they travel as a family, Inuit people use sleds pulled by snowmobiles. These strong, heavy sleds (more than 200kg) are made to transport their family, but also food, compound gear, gas and fuel for stoves. Inuit people from Canada do not use dog sleds very often. Snowmobiles allow then to cover 3 times the distance in the same time. Nevertheless, trip duration depends very much on difficulties encountered on the trail (deep snow, compressed ice, hills…) and it is important to take these points into account when you plan your trip. Besides, I have never seen a snow machine working without a problem! I would even go as far as to say that they regularly have breakdowns. It is also very important to take that into account when you organize your expedition as time is precious, and must to be used to find animals and not to solve logistical problems. In give you an idea of what an Inuit sled is like, try to imagine a wooden palette 3m long and 1.5m wide, mounted on two long skates, onto which is attached a long box also made of wood with a roof covering half the front part, all looking strangely like a motor boat! The sled is covered like this to protect the passengers from the wind and the snow. In the sled, one or two mattresses and caribou skins are installed in order to prevent the passenger from the bumpy ride over the pack ice. These mattresses and skins will come in useful later to insulate sleeping bags from cold of the ice in the tent. 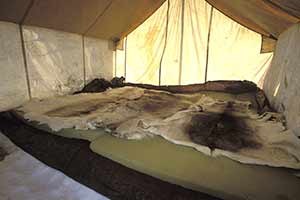 Inuit people also install stoves in their tent to cook (when they travel with “white men”!), but also to maintain an acceptable “warmth” when sleeping. It is rarely below -10°C inside the tent, even when it is -30°C outside! Encounters with animals in the arctic are rather unpredictable. There is no reserve where animals are gathered, as in Africa, and the knowledge of the Inuit people is very important in order to find animals and to find your way in this white desert. It has been shown that polar bears, for instance, can travel hundreds of kilometres from Canada to Greenland or from Alaska to Siberia. That means it is no mean feat to find one. 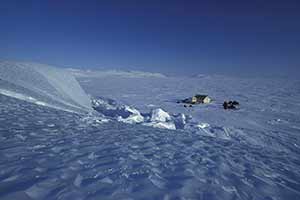 Actually, in just a few hours and within 50km we encountered Peary Caribou, Muskoxen and Arctic Wolves – then nothing for the next 5 days and 400km!
On top of this, these precious encounters last at best only a few dozen minutes! So it is not possible to use heavy lenses on tripods and just wait in one place. Actually, when Charlie spotted an animal, he separated the sled from the snowmobile and I climbed with him into the back of the snow machine. Then, he tried to get close to the animal (15 to 25m) so that I could take some photos, either by foot (for the caribou), or from the snow machine (for the bears). What is important in these moments is speed and mobility: a camera body, a small zoom lens, that’s it!
Encounters with wolves happened differently, but also very fast. We had a stop to drink a cup of tea and warm-up a little bit, when we saw two wolves walking in the tracks of the snowmobiles. One of them made a detour of roughly 70m, but the other walked directly towards me, without any hesitation, as I had separated myself from the rest of the group in order to take some photos. I still do not know if the wolf was curious (as in the encounter I had read about of an American photographer) or the wolf was hungry as my Inuit guides told me later… I did not know, but still, the result was that I had in front of my camera the animal of my dreams… yes, only for a few minutes, but less than 25m away!This encounter with the wolves left me puzzled as it happened in a place where my Inuit guides and I did not expected it, 200km from the place they were supposed to be!
“Expect anything, even the unexpected!”: this is definitely the best lesson I have learned from my travels to the arctic!