The Spirit Bear of the Great Rain Forest 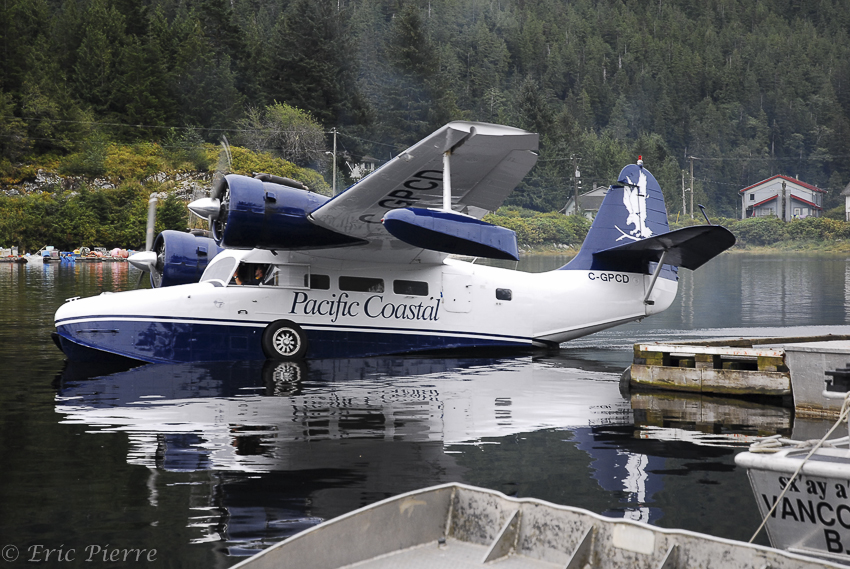 The Great Rainforest of British Colombia is located along the Canadian Pacific coast between Vancouver and the Yukon Territories. A group of differently sized islands (Vancouver Island, Princess Royal Island, Queen Charlotte Island and many other, much smaller, islands) protects this coast from the ocean storms and winds forming a network of channels allowing boats to move safely between them. 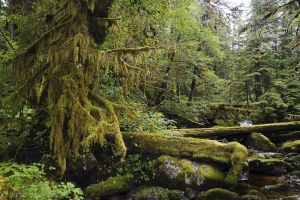 For centuries, native people have lived in these regions, moving in canoes along these protected shores. In the forest, remains of old dwellings called “Great Houses” by native people, are dug into the ground and covered with huge trees, witnesses of a past, much before the arrval of Europeans in the 18th century.
Continuous heavy rains are normal weather in this part of the planet and these conditions help vegetation to grow spectacularly. There is not a single square meter without a tree, without bushes, giant herbs or mosses. An unbelievable layer of moss covers everything: from the ground to the tops of the trees. There are even mosses growing suspended from branches. This region has medium-sized mountains (summits between 1500 and 2000m) with myriad creeks and small rivers fed by constant rains. All this water travels down the mountain slopes and then on to the channels between the islands, before reaching the North Pacific Ocean. 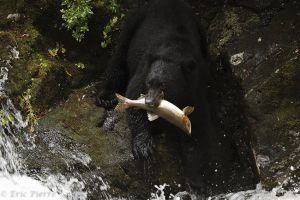 Every year, at the end of summer, a huge quantity of salmon arrives in these rivers, leaving the ocean to try to climb up the rivers and the creeks as far as possible, to reach the place where they themselves were born many years before. This annual event called the Salmon Run is a great mystery; nobody really knows how the salmon remembers the place where it was born. Obviously, this is an opportunity eagerly anticipated by all the inhabitants of the Great Rainforest – particularly by the bears. Two species of bear live here: the Black Bear in the narrow and deep valleys of the forest and the Grizzly Bear mostly at river mouths, on flat areas. 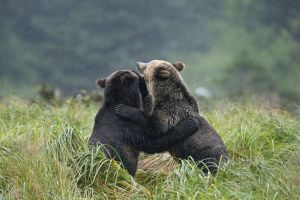 Many other wild species benefit from the return of the salmon, including bald eagles, numerous along North Pacific coast, and more surprisingly wolves. These wolves seem to have adapted themselves to eat salmon, but strangely they eat only the head and not the rest of the fish. This picky eating allows us to easily find packs of Wolves thanks to the leftovers of their meals! Native people say that wolves like and need a substance found in the head of the salmon. For their part, bears make a different choice. They prefer the eggs of the female, and so just after having taken a fish, if they see that it is a male, they just release it. Even so, the poor male salmon generally does not survive because of the Bear’s brutality when catching him. 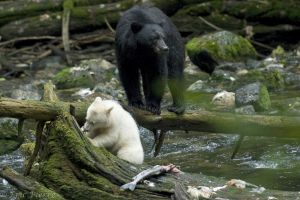 Sharing a habitat with the black bear, in the forest valleys and along creeks but rarely in open spaces like river mouths, the living legend that is the symbol of the Great Rainforest might appear: the Spirit Bear also called the Kermode Bear. It is actually a black bear with a white fur, but truly member of the black bear family. This bear is extremely rare. A black bear female could have a white bear among her cubs. For its part, if the white cub is female, she will be able to have either black or white cubs. Spirit Bears have a genetic mutation altering their colouring, which is passed from parent to cub but is not always seen (like the genes for red hair in humans). On top of this low genetic probability of sighting a Spirit Bear, it is a phenomenon which can only be seen in this part of the world, more specifically on just a few islands in British Colombia.

I personally had the opportunity, with the help of local native people, to observe a mother black bear with her one-and-a-half year old Spirit Bear cub. The female was visibly on alert and constantly checking around them because many black bears wandering along the creek and could arrive from anywhere through the dense vegetation. In the case of such an encounter, generally the biggest bear scares the smallest away, but in the case of the cub, an adult male might attack to kill. This is a classic behaviour to make the female ready again for mating. So the mother did not take much time to eat some salmon and look after her baby who was eating dead salmon left by adult bears – he was obviously not skilled enough to catch them by himself. 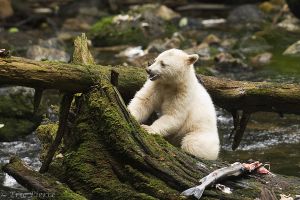 Over three days this female came back with her cub to the same place and strangely at more or less the same time. My native friends seemed not to be surprised by this regularity. They gave me a further proof of their deep knowledge when another day, in order not to disturb our Spirit Bear too much, we went to a different creek where according to my guides, three years ago they often saw an adult Spirit Bear, but since that time they had not seen him again. According to them, the bear had probably gone higher up the creek, but they still believed that he was somewhere close to this place. And actually he was! Exactly on that day, the living legend of the Great Rainforest came back, exactly where my guides were waiting for him – and he was visibly in good shape. We watched him for a few minutes, him doing the same to us, and then, as untouchable as a spirit, he moved back slowly into the deepness of his secret forest.